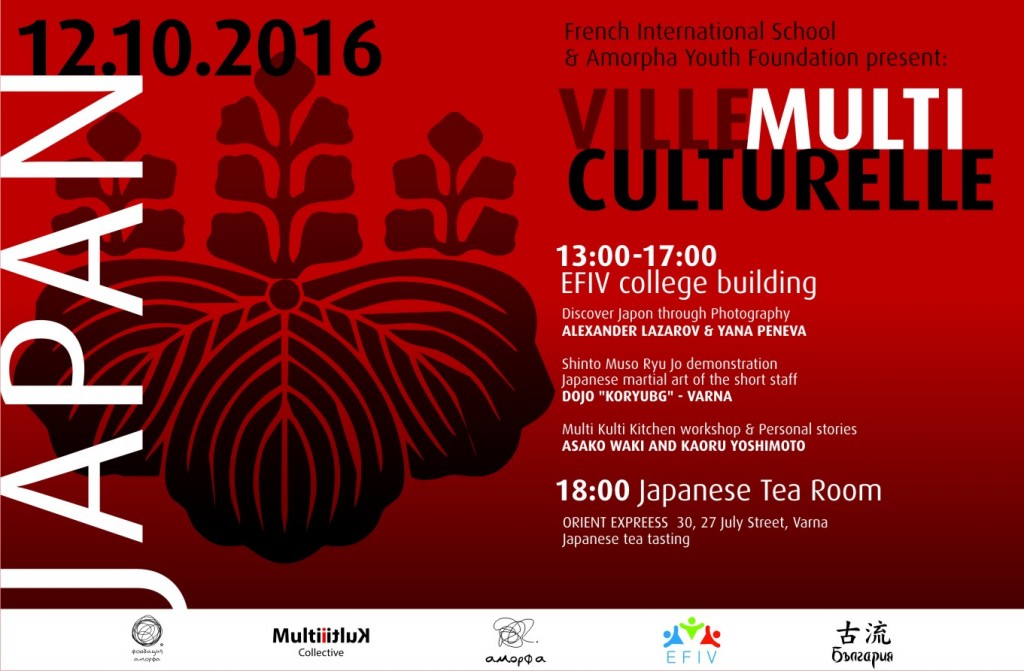 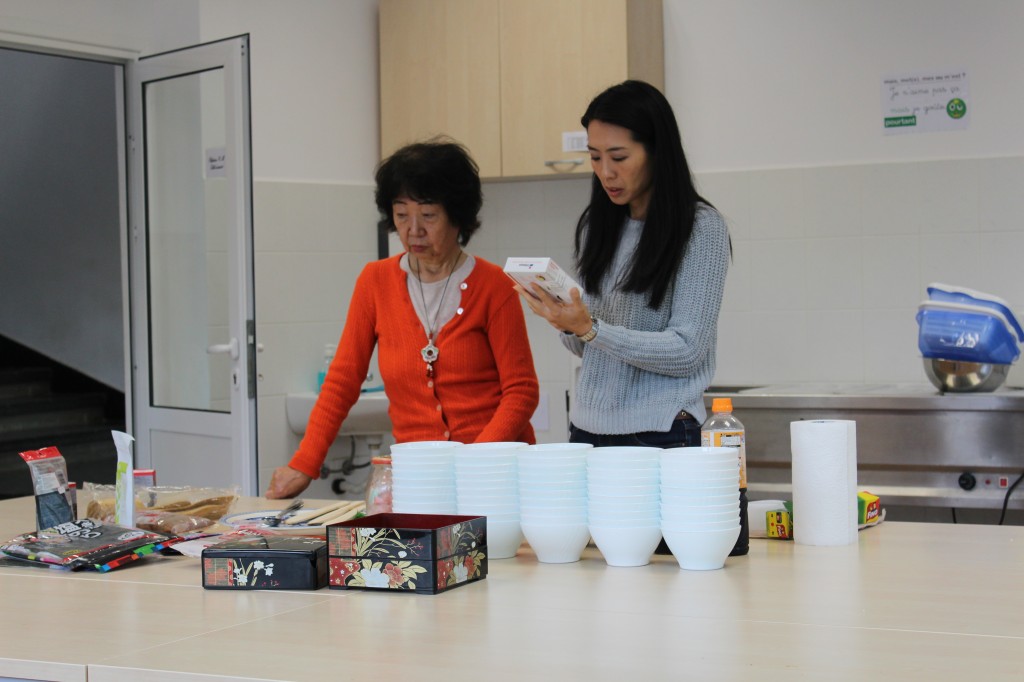 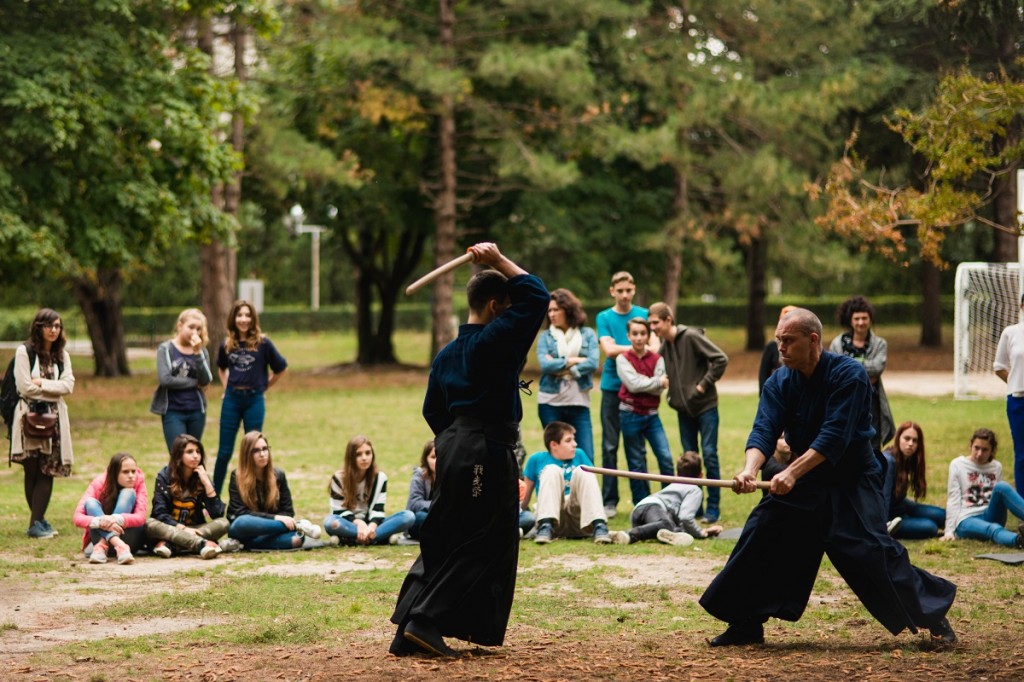 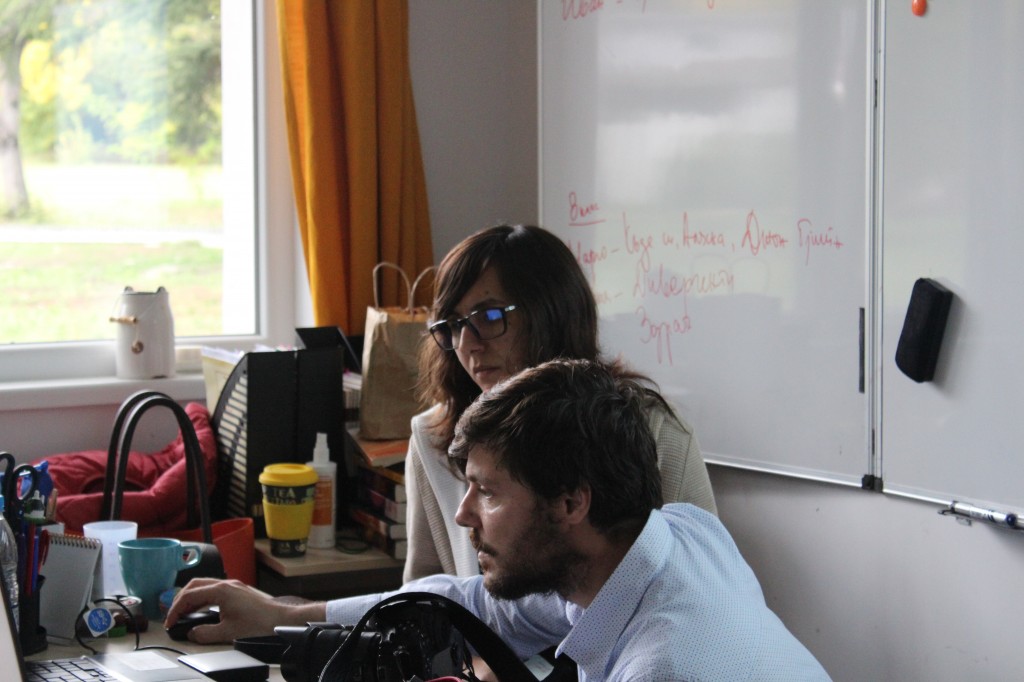 One of Amorpha’s favourite photographers and frequent addition to our team in action, Alexander Lazarov has an eye for portrait and apparently a heart for travel and discovery. We invited him and his partner photographer Yana Peneva to relate the story of their recent trip to Japan and engage our young audience at the school in a vivid and full-blooded encounter with the culture, sights, sounds and people of Japan. Honoured to speak at a photography seminar in Tokyo, the two Bulgarian photographers had had the oportunity to explore a number of places throughout the country in the creatively and culturally stimulating company of other such professionals to whom landscape and light afford a much richer multiplicity of interpretations.

The exciting visual and spoken memories of the young photographers set the tone of our Japanese event and created the best possible context for our journey through further aspects of this truly amazing culture.

The story of the trip retold in photographer Yana Peneva’s website blog:

‘We were sitting in the wicker chairs of the famous Cubo beach bar in Varna drinking hot chocolate when an unexpected question suddenly charged the air around us. ‘Why don’t you come to Japan to do a few seminars?’ My mind refused to believe this was possible until we actually boarded the plane and I realised we were indeed really going to Japan.’

‘Japan? What is it like? It is different. Everything is used up to its utmost limit, be that space or time. There are not many Japanese words I can recognise. However, ‘thank you’ could be heard everywhere, in the tube, on the radio, in cafés, in restaurants, in the street. People thanked each other constantly and about anything.’

‘We landed at the airport in Kansai and set off to Kyoto. Our first stop was at the photography studio of our hosts in Kyoto. There you can rent a kimono and have a photoshoot. Kimonos are extremely expensive and heavy, difficult to wear, but they keep your body upright. This is where we started.’

‘The photography school in Osaka. It is time for the seminar to begin. At the entrance, our friends and hosts are welcoming the attendees. Each seminar was attended by 30 to 40 people most of whom active photographers, some were students. We even received praise by a photography professor – an exciting gesture of recognition. At the seminars we spoke mostly about the psychology of photography and people’s questions to us were mainly about our perceptions and emotions. Many asked how we would feel while shooting in particular situations and how we would proceed under various circumstances.’ 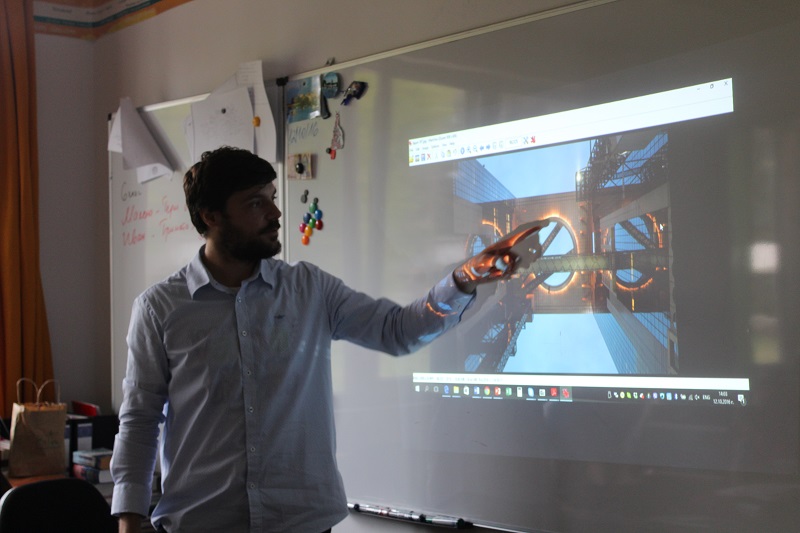 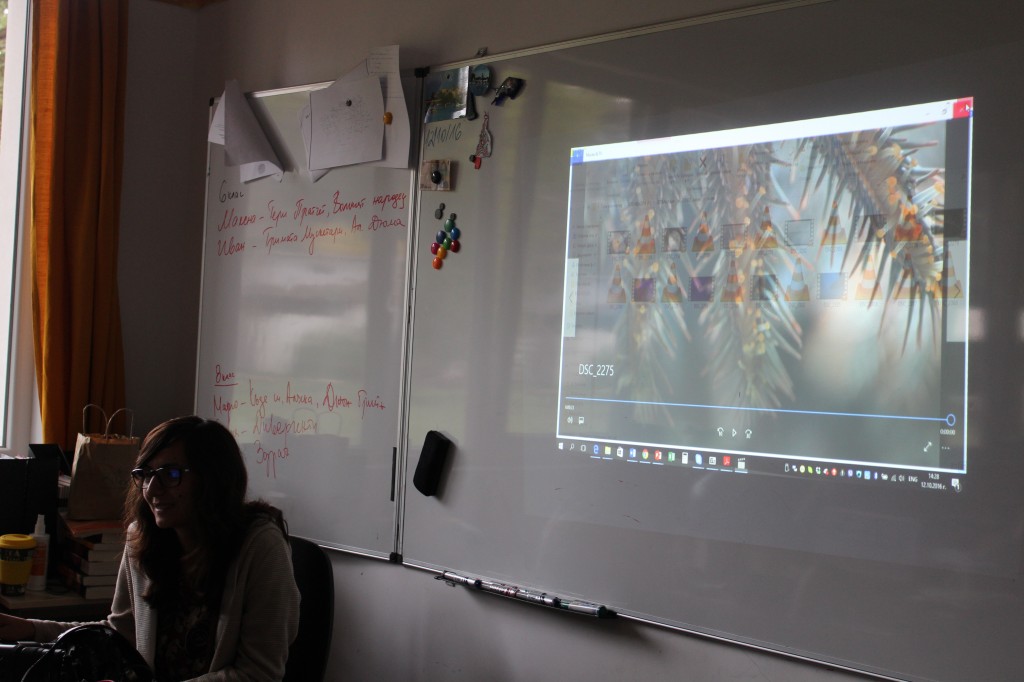 While discussing a possible menu for our event with Asako-san and Kaoru-san at the Japanese tea room, we agreed that each meal should be simple, very common and revealing of the lifestyle and taste preferences of Japan. In terms of quantity, we kept in mind the size of the nuclear Japanese family, kazoku. Miso soup was quickly suggested. Onigiri was easily paired by miso soup and an every-day food necessity at home. Simple and easy to make, unlike the more special and complicated sushi, onigiri stood up for everything we wanted to present: basic products, genuine taste, portion size, cooking utencils, and cookery. The dessert was delicious minimalism with a traditional twist of flavour and colour. Green matcha tea was served separately at the tea room as fitting for the epitome of Japanese cuisine. 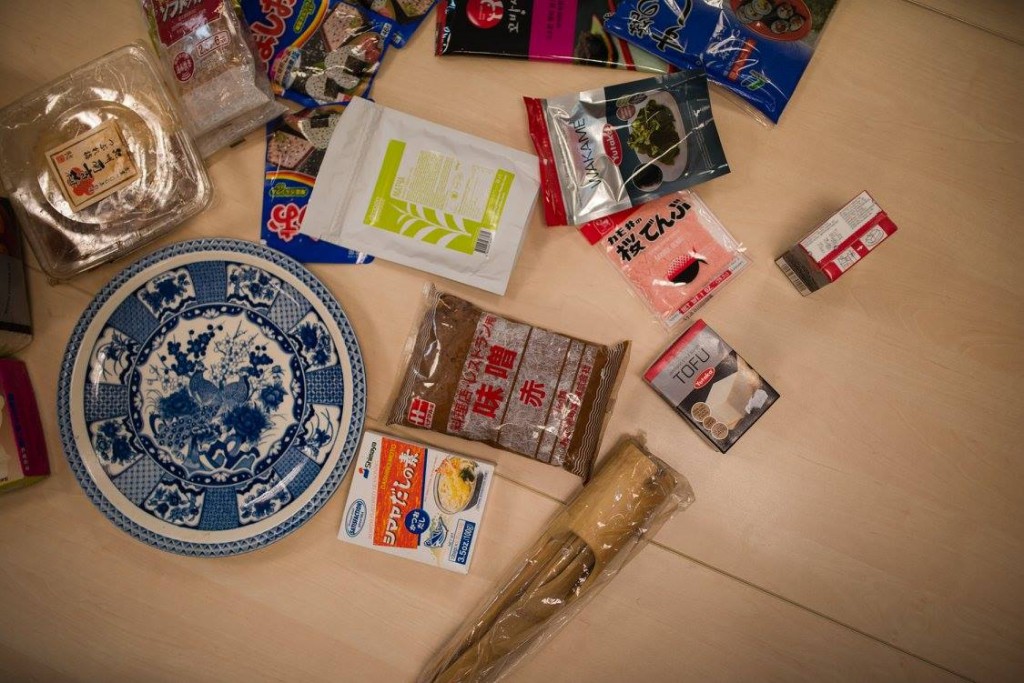 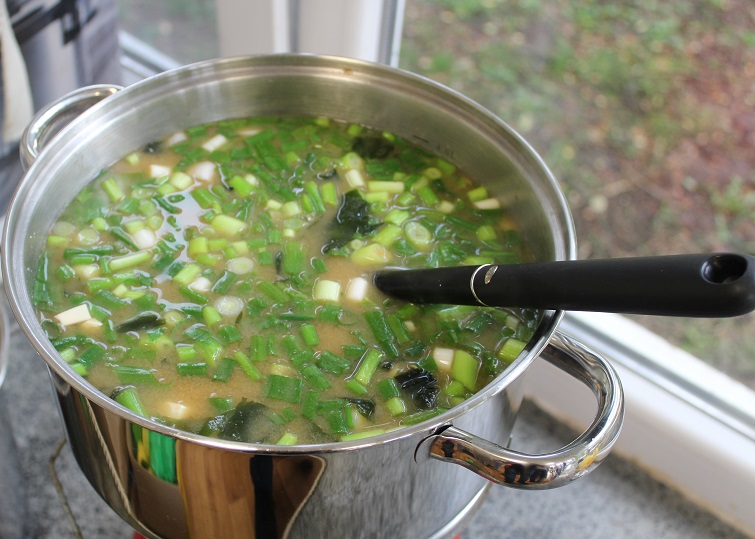 Preparation
First we soaked the wakame seaweed for 15 min. For this we had chosen a larger bowl expecting the wakame to increase its volume three times. Then we placed the water in a pan to bring to a simmer. We divided in three working groups: one group placed the miso paste in a small bowl and whisked it with warm water until smooth, the second chopped the spring onions while the third cubed the tofu. We added the miso (we used aka miso, or red miso, which has a higher percentage of soybeans and/or a longer fermentation period) and stirred. This was to ensure it did not clump. To the miso and water we added the soaked and drained wakame to simmer for 5-7 minutes. We added the remaining ingredients to the pot and cooked for 5 more minutes. The miso soup was a complement to the onigiri.
Vegetarian/vegan recipe. As we had vegetarians among us, the second pot of miso soup was prepared without dashi. 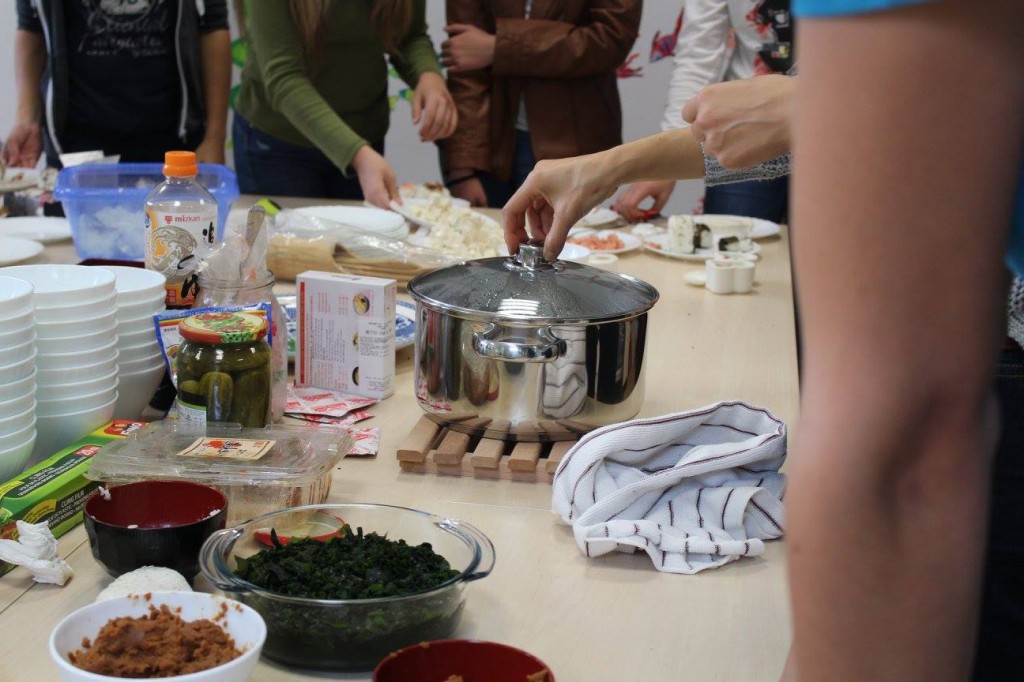 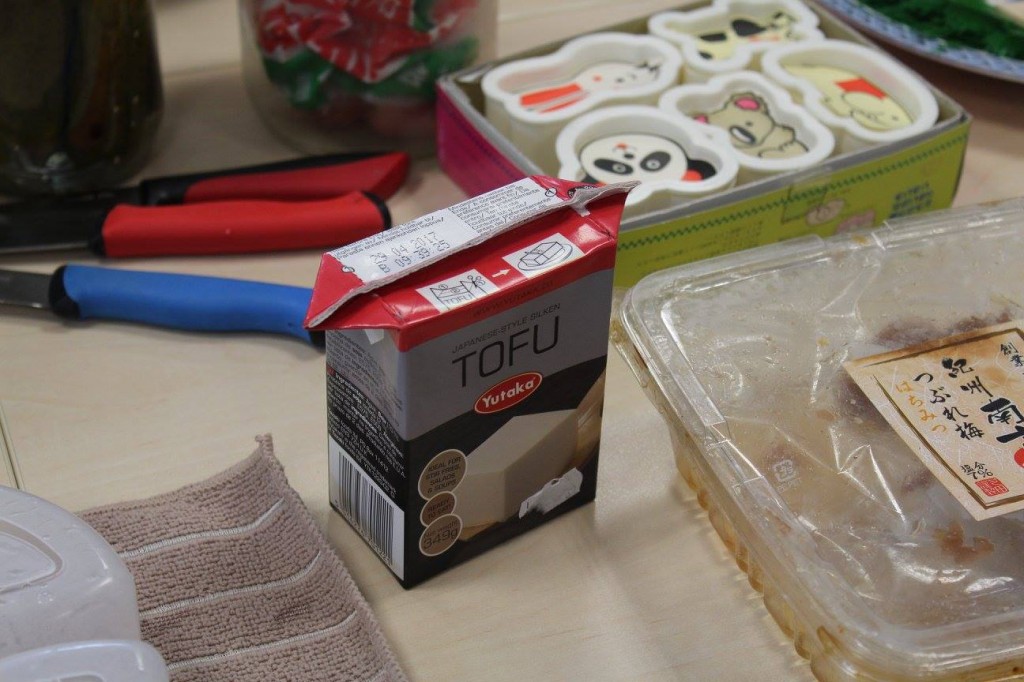 Onigiri with Umeboshi, or Rice Balls with Pickled Plum 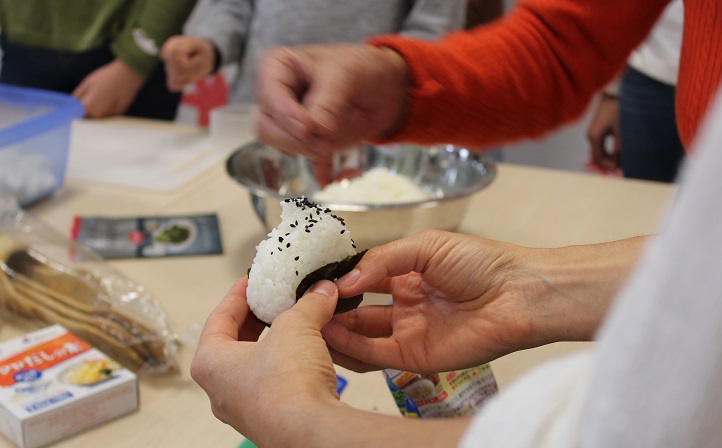 Onigiri, also known as rice ball, is a Japanese comfort food made from rice into triangular shapes and wrapped in nori. We chose to cook onigiri as sushi seems to be far more popular in Varna and we needed something different. To many among us who were new to Japanese cuisine, onigiri seemed to be very similar to sushi, or a type of sushi, but our Japanese hosts explained this was not the case. As Asako-san explained, onigiri would be part of your every-day menu, whereas sushi was considered a more special dish. Recipe-wise, the main difference between the two is that onigiri is made of plain steamed rice, while sushi uses steamed rice with vinegar, salt, and sugar. Onigiri is simplicity itself, easy to make and quite filling.
Ingredients
450 gr short grain rice
3 umeboshi
10 gr katsuobushi (dried bonito fish flakes)
2 sheets of nori
gomashio topping (unhulled sesame seeds (goma) seeds and salt seeds (shio)
sakura denbu topping, salty and sweet codfish flakes
10 slices of pickled ginger as topping
soy sauce to taste
Serves 3

Preparation
We started by washing and soaking the rice. We put the necessary quantity of rice in a bowl and rinsed in three times. Then we let it soak in the rice cooker bowl for 30-45 minutes. The rice to water ratio is 1 : 1.1 or 1 : 1.2. For example 150 g of rice become 330 gr of cooked rice, which will be about 2 bowls of rice or 3 rice balls. Once the cooker indicated the rice was ready, we opened the lid and fluffed it with a rice paddle as we waited for it to cool down. Impatiently, we filled several bowls of rice and started learning how to shape the onigiri triangle. It was easier to use transparent wrapping or even triangualar or funny animalistic plastic onigiri forms. However, it was much more fun to feel the rice directly in our palms having learned to avoid rice stickiness by dipping our hands in a bowl of salted water. The most basic type of onigiri was ready. The final step was to cut the nori sheets into smaller pieces of 10 by 5 cm to hold and flavour the onigiri. We used some gomashio and sakura denbu as topping, separately or combined, and added drops of soy sauce.

Then we explored onigiri fillings. As we felt slightly unprepared to go full power umeboshi, instead of using one plum in each onigiri as recipes suggest, we sliced plums into smaller pieces and used only one or two pieces to place in the centre. As alternative or additional onigiri filling we used katsuobushi which we had mixed with a few drops of soy sauce. Topping was again gomashio and/or sakura denbu. The onigiri was complemented by the miso soup we cooked.

Vegetarian/vegan recipe: Skip katsuobushi in the filling and sakura denbu in the topping. 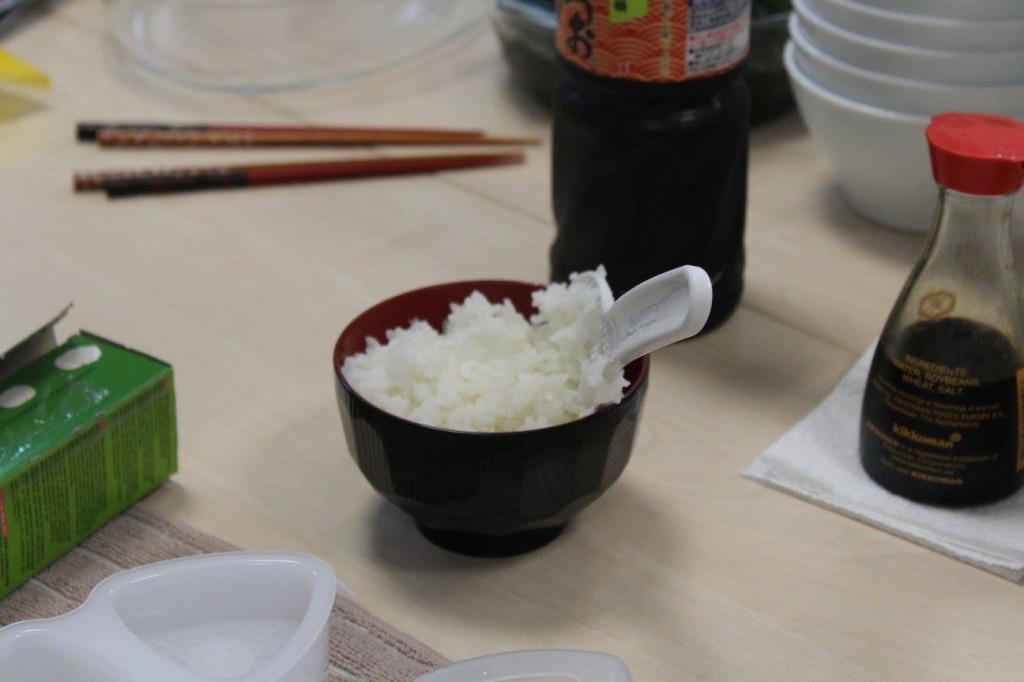 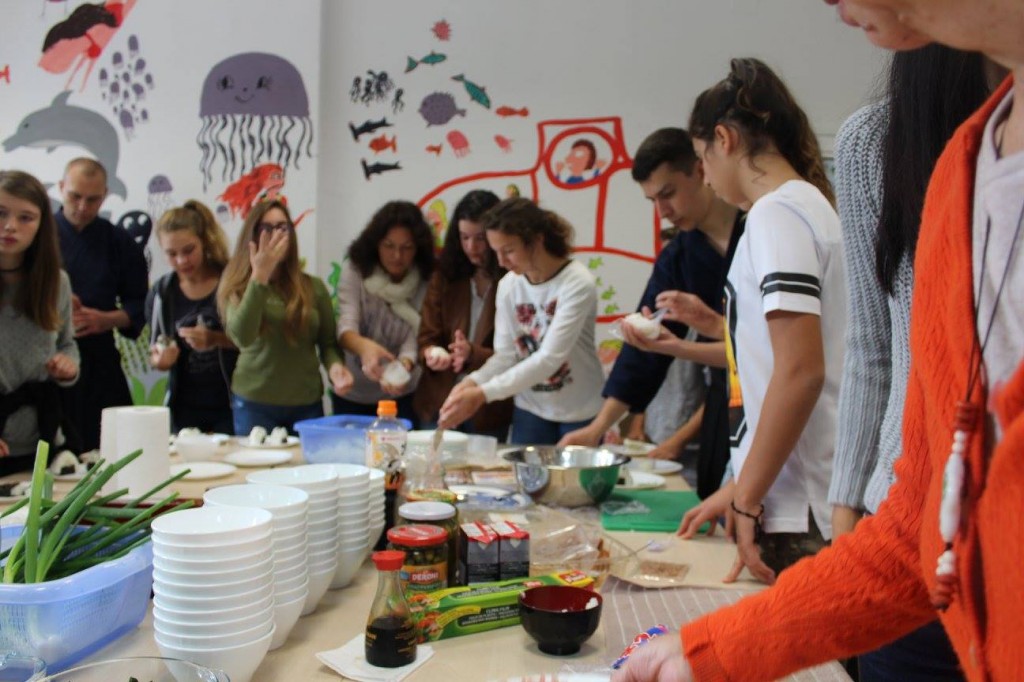 Preparation
We took the ice cream out of the fridge and left it to melt for about 15 minutes. We put a large scoop in each bowl, sprinkled it with matcha powder, whisked it, and served our matcha ice cream. 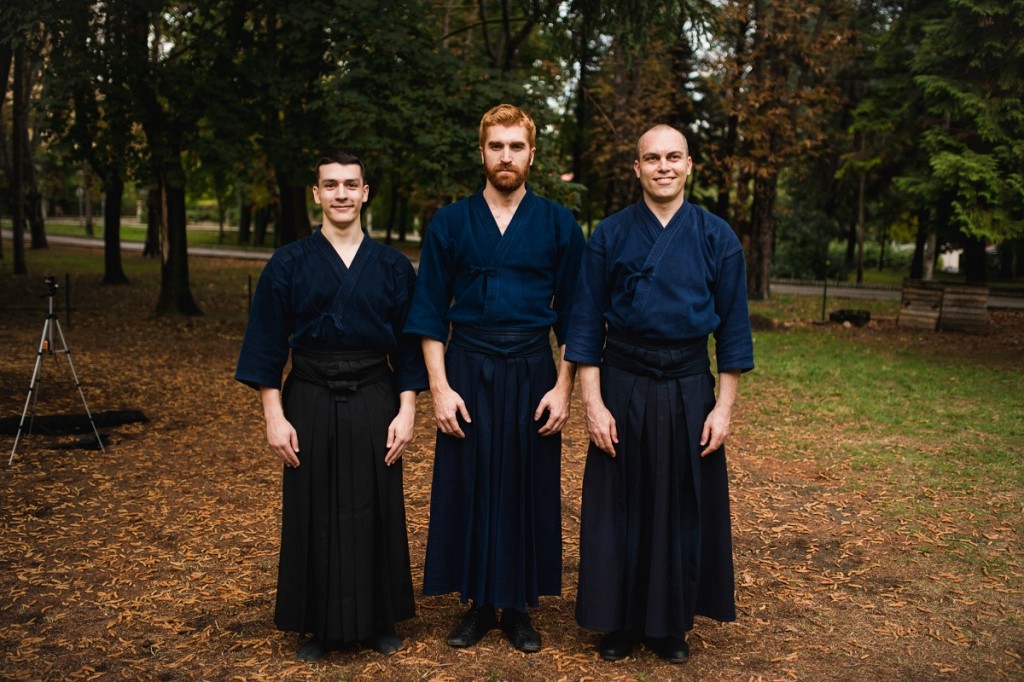 Shinto Muso-ryu Jo is a traditional Koryu, i.e. classical Japanese martial art, school of the Japanese art of jo-jutsu, the art of handling the short stick (jo, in Japanese, a round, oak stick slightly over 4 feet or 128cm in length). The purpose of the art was to defeat a swordsman in combat using the jo, with an emphasis on proper distance, timing and concentration.

Shinto Muso-ryu is said to be the oldest style for using a stick jo in combat in Japan. It was founded in the early 17th century by Muso Gonnosuke Katsuyoshi, an exponent of Tenshin Shoden Katori Shinto-ryu. Shinto Muso-ryu oral tradition maintains that Gonnosuke once fought Miyamoto Musashi, one of the most famous swordsmen of the time, with a staff bo in a training match and was defeated by Musashi’s cross-block jujidome technique. Gonnosuke retired to Mt. Homan in Kyushu to contemplate the reasons for his defeat. Eventually, he received divine inspiration for a new staff-like weapon jo and developed fighting techniques to use it. According to a record at Tsukuba Shrine in Ibaragi Prefecture, Gonnosuke was thus able to defeat Musashi in a rematch.

In time, the ryu came to incorporate other weapon systems such as Ittatsu-ryu Hojojutsu, Kasumi Shinto-ryu Kenjutsu, Ikkaku-ryu Juttejutsu, Isshin-ryu Kusarigama and Uchida Ryu Tanjojutsu. There are a total of 64 techniques in Shinto Muso-ryu jo that are divided into a number of sets, each with a different character. Training is systematic and develops the exponent’s technical skills and psychological abilities, from body movement and weapons handling to the proper use of timing, targeting, and distancing, and intense mental or spiritual training, all to enable the exponent to successfully use the weapon in mortal combat. Exponents begin their study of jo by learning a set of twelve basic techniques kihon waza, which contain all of the style’s essential movements. There are five levels of recognition in Shinto Muso-ryu jo. Menkyo kaiden is the style’s highest level of recognition and these exponents are the only people who are formally qualified to teach and promote exponents of Shinto Muso-ryu jo. 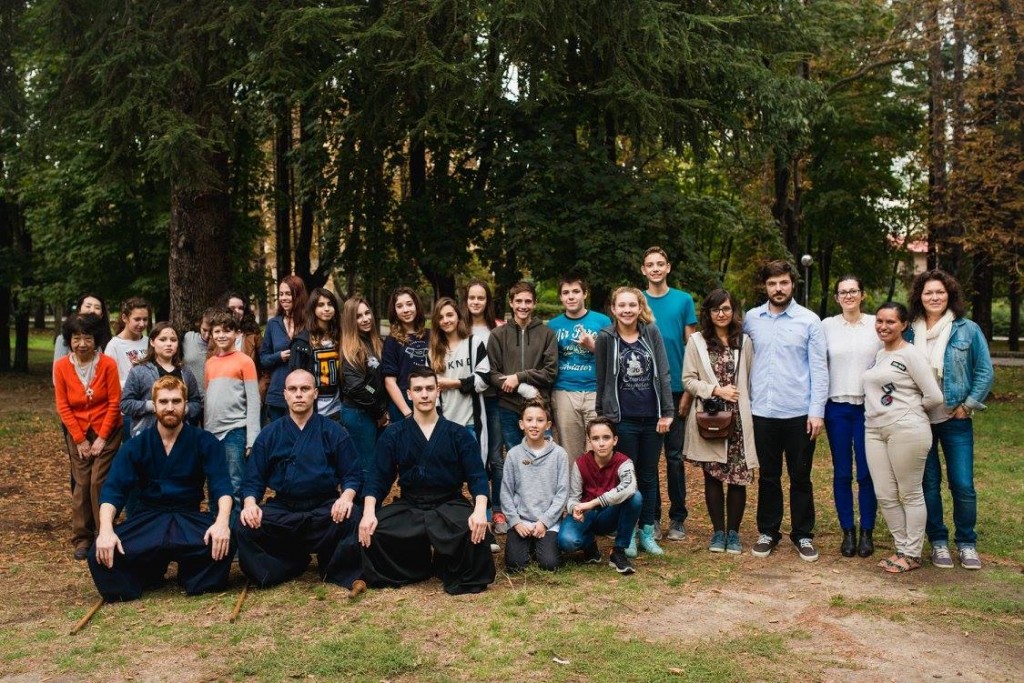 We crossed a rain flooded city centre to get to the Japanese tea room of Asako-san, Orient Express. Cosy and wet, we enjoyed warm matcha green tea, a specially sweetened variety more easily enjoyed by people new to the tea’s characteristic taste. 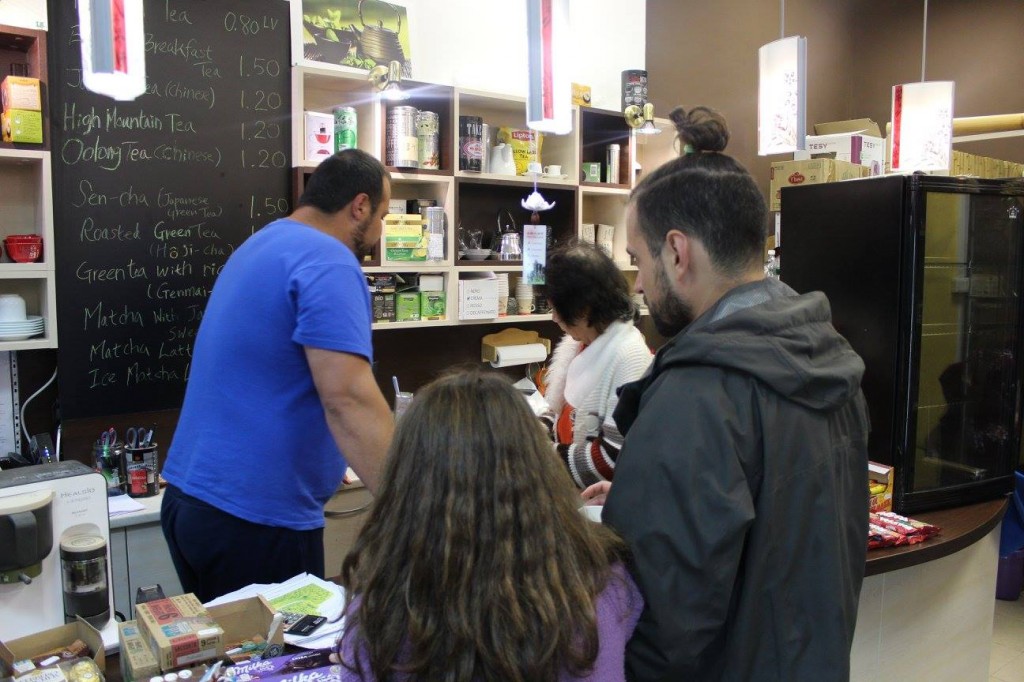 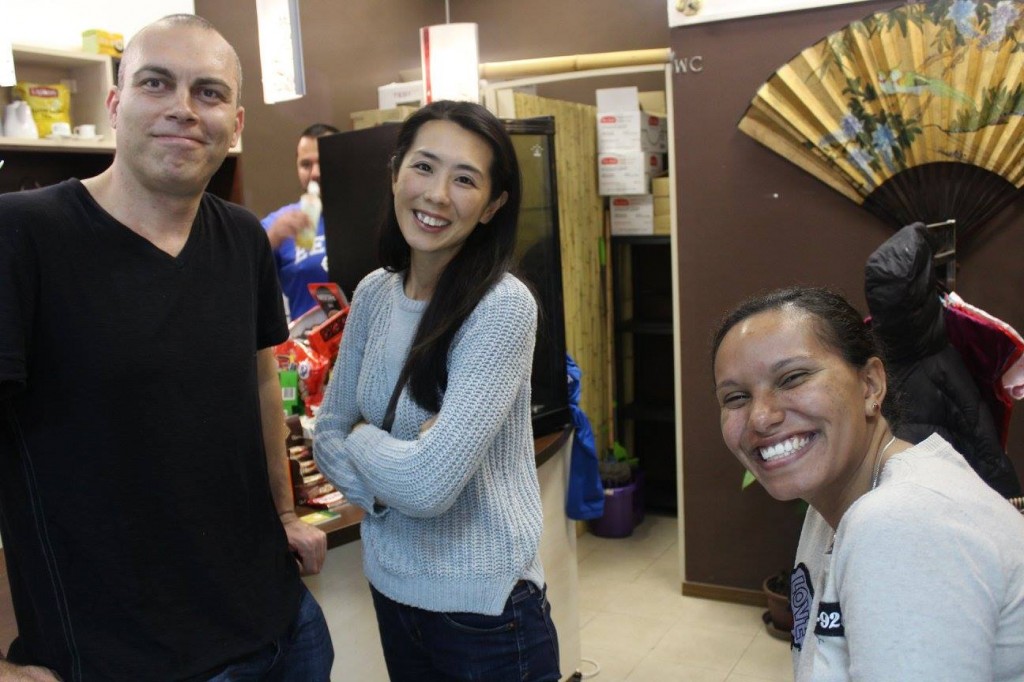 SEE ALL PHOTOS FROM THIS BEAUTIFUL JOURNEY

READ MORE ABOUT OTHER EDITIONS OF OUR INITIATIVE VILLE MULTICULTURELLE :: MULTICULTURAL CITY